The Decade’s Hottest Sector Is Just Getting Started

After college, Marc Benioff went to work at Oracle (NYSE: ORCL), the database software giant. He worked his way up the corporate ladder and became the youngest vice president in the company’s history at just 26 years old.

Through his time at Oracle, Benioff had a front-row seat at witnessing how the Internet was beginning to change everything. He knew it was only a matter of time before it disrupted the business world, too.

One thing that he noticed was that these giant software packages being developed by the likes of Microsoft and Oracle were extremely expensive. This made them unaffordable for the little guy.

So, Benioff set out to deliver software in a new way… using the Internet. His goal was to make software cheaper and easier to buy and use, and it would disrupt the entire software industry.

In 1999, Benioff started Salesforce.com (NYSE: CRM). The company would sell software to track sales leads and orders and manage customer contacts and information. Something every company needs.

This was an area Benioff knew well, as Oracle was a dominant player in the space. But he also knew that Oracle’s software cost millions of dollars and was extremely time-consuming for customers to install and figure out. Yet, customers continued to line up to buy it.

Benioff hired a small team of developers and built his software from the ground up. Unlike other software packages, which took months to install, this one would be delivered and run on the Internet. Customers could also use it immediately, on any device that was connected to the Internet.

Today, using the Internet to access software is called “cloud computing.” We take it for granted. But you have to remember, at the time, this was a radical idea.

Benioff had invented a new selling and delivery model for software, now known as Software-as-a-Service, or “SaaS.”

To say Salesforce simply disrupted the market might be an understatement. The company went public in 2004 with sales of less than $100 million. Its grown sales at an average annual clip of 39.8% per year since then. Last year, it pulled in more than $21.5 billion in sales.

Out With The Old, In With The New

More than 70 other companies have gone public emulating Benioff’s model since 2004. And it’s easy to see why… before Salesforce, software companies sold their software under what’s known as a “perpetual license model.”

Under this model, companies (and consumers) would fork over a large, one-time license fee and they’d own the software. You might remember forking over a couple of hundred dollars so you could load Microsoft word and excel on one computer.

The problem is not only was this expensive, but that one-time purchase was only good for one computer. As a consumer, this wasn’t much of a problem — even though it could be a hassle.

But imagine this on a much bigger scale… Large corporations would have to have to back up the Brinks truck to purchase these licenses for all their employees. They’d typically purchase extras for future employees, and if they didn’t get used, then it simply went to waste.

Then there’s installation and training fees… customer support fees… plus all the time it took for these activities… it really adds up.

It’s also easy to see why this wasn’t affordable for small or medium-sized businesses.

Benioff changed all this when he introduced the SaaS model.

In the SaaS model, the software is hosted on the vendor’s servers, not the customer’s computer or network. And instead of purchasing and owning the software, they rent it.

Companies simply sign up and pay for what they use. They pay recurring subscription fees that can be paid monthly, quarterly, or annually.

There are no maintenance fees, they get free upgrades to the software when the company releases it. Even better, there’s no need to schedule someone to come out and install it. It simply gets upgraded one time (on the software company’s server). Then all customers immediately get access to the latest version with no downtime.

The SaaS model makes buying and using new software a breeze compared to the old legacy days. Even better, this new model is highly lucrative, with thick margins and fat profits. It’s no wonder why this has been the top-performing sector for the last decade…

Capital efficient companies make wonderful investments since they can grow rapidly without needing to invest larger and larger sums in capital expenditures — like new buildings and equipment — that drain valuable cash and lower returns on investment.

It makes sense. Software is nothing other than computer code. Once you’ve paid for the initial cost of creating it, the “cost” of producing additional copies is next to nothing. This allows software companies to not only scale quickly but produce thick margins. This is reflected in a company’s gross margins — the profit after subtracting the costs of sales.

Salesforce’s gross margins hover around 70%. Compare that to a manufacturing company like Ford Motor Company (NYSE: F) whose gross margins are around 10%.

Capital efficiency and thick margins translate into massive profits. Big profits typically translate into market-beating returns for shareholders. And this has especially been the case with SaaS companies.

There are about 80 pure SaaS plays that are publicly traded. I took the four longest-tenured publicly traded SaaS stocks. The “worst-performing” one trounced the overall market by more than 2-to-1. 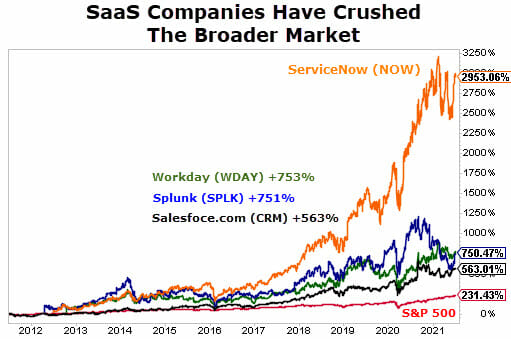 And that’s the worst-performing of the bunch…

These results speak for themselves. It also shows why software companies — and SaaS companies in particular — have been the hottest sector in the market.

Now, I’m not necessarily saying all of these companies are “buys” today — although you could probably do a lot worse.

In fact, we just recently added a newly-public SaaS company to our portfolio over at Top Stock Advisor.

But the larger point is this…

It’s clear that SaaS is a superior business model. And you’re going to see more and more companies coming to market with SaaS (or other “as-a-service”) characteristics in the months and years ahead.

This is where I want my money to be, and so should you.

P.S. There’s another area of the market that I’m laser-focused on — and it could make investors an absolute killing in the months ahead…

I’m talking about outer space. And before you call me “crazy,” you should know that dozens of billion-dollar companies are already in the race to commercialize space — not just Elon Musk with his company, SpaceX.

In fact, I’ve found a secret “backdoor” way we can piggyback on the success of one of SpaceX’s latest projects.