If Your Portfolio Is Missing International Stocks, You’re Missing Out

According to the World Bank, the United States accounts for about 55% of the world’s stock market value. That means 45% (more than $40 trillion) resides overseas. In fact, 80% of the world’s publicly-traded companies are foreign-based, compared with 20% headquartered domestically.

So there are four times as many investment options outside our borders than within — many with two to three times the meager 2% average yield found stateside.

That’s why I tell investors whose portfolios lack international exposure that they’re only looking at part of the menu. You’re missing out on half of the world’s potential opportunities.

A World Of Choices At Your Feet…

Take the financial services sector. We like to think that New York’s JP Morgan Chase (NYSE: JPM) is the world’s mightiest bank, with over $3 trillion in assets on the balance sheet. But it’s not even close. London’s HSBC Holdings (NYSE: HSBC), Japan’s Mitsubishi UFJ (Nasdaq: MUFG), and China’s Industrial & Commercial Bank are all larger.

In fact, just four of the world’s 20 most powerful banks are based in the United States. So if you limit your portfolio to domestic stocks, then you automatically eliminate the other 16 from consideration. And that’s a mistake — if for no other reason than the fact that MUFG offers more than double the payout of JPM.

The USA does have bragging rights to the world’s largest retailer in Wal-Mart (NYSE: WMT). But France’s Carrefour (OTC: CRRFY) isn’t too far behind, with over $80 billion in annual sales. And Germany’s discount grocery chain Aldi has over 11,000 stores in 18 countries, more outlets than Albertson’s and Publix combined.

If you look at the world’s 30 largest retailers by sales, only 11 call the U.S. home, whereas 19 are headquartered in foreign countries from Australia to the Netherlands. Likewise, more than half (11) of the 20 biggest money-making pharmaceutical companies are based outside the United States. If you don’t have any overseas exposure, then you could benefit from a powerhouse like GlaxoSmithKline (NYSE: GSK) — which sports a robust dividend yield near 6%.

The story is the same across many other industries… steelmaking, mining, manufacturing, you name it.

Any baseball fan can tell you that the USA doesn’t have a monopoly on talent. We can certainly be proud of homegrown slugger Mike Trout from New Jersey or ace pitcher Clayton Kershaw from Texas. But there isn’t a single team in the big leagues that doesn’t also have foreign-born phenoms on their roster. A few foreign superstars can round out a winning team. So it pays to scout around for heavy hitters that can strengthen your lineup. The results might surprise you.

Guess how many times the S&P 500 has been the world’s top performing index over the last 30 years. Zero. Not once. Last year’s 18% return was nothing to sneeze at. But it wasn’t even close to Denmark’s 44% return. The year before New Zealand took top honors with a gain of 39%.

Now, I’m not suggesting that you call your broker and instruct him to bet everything on the Copenhagen Stock Exchange. In fact, please don’t. The point is that foreign markets routinely outrun our own — and those returns aren’t being skewed by one or two standout performers.

AllianceBernstein has some enlightening statistics on this subject. On average, three-fourths of the 50 top-performing stocks each year have been found outside the U.S. That trend remained firmly in place last year, with the U.S. hosting just 2 of the world’s 50 biggest winners. That means the other 48 (96%) traded on foreign exchanges. 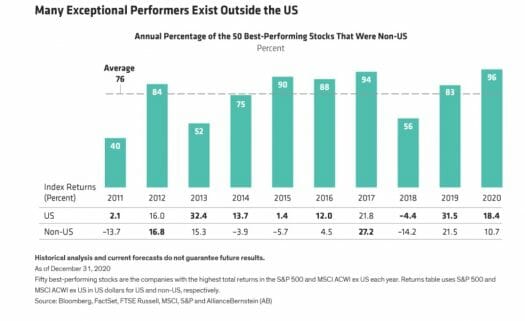 3 Reasons Why Now Is The Time For Foreign Yields

Long-time readers might recall that I’ve made some of these arguments before. After all, they ring true year after year. But international markets could have even more of an edge in 2021. There are at least three key macro developments that bolster the case for overweighting foreign stocks over the next 12 months.

1.) The U.S. dollar is sagging.
Between March 2020 and early 2021, the dollar weakened about 10% relative to a basket of foreign currencies to a multi-year low. That’s a huge move in the currency market, triggered in part by global vaccine deployments and an exodus out of safer assets. 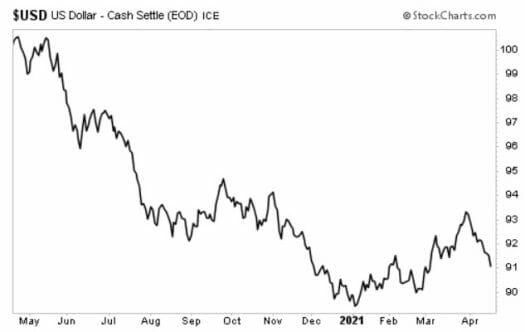 Most analysts see this weakness persisting for at least another 3 to 6 months. While a softer dollar can be a tailwind to large multinational business like Apple that generate a large chunk of sales overseas, extended periods of dollar weakness have generally favored foreign stocks.

Last July alone, the dollar softened 4.8% against the euro. So even though European stocks fell 1.5%, U.S. holders still saw a net 3.3% gain in dollar terms after currency translation. Of course, when foreign stocks are rising, a weaker dollar will only pad the returns.

As for the longer term, consider that most foreign governments have healthier balance sheets. The last time I checked, Canada and Sweden weren’t saddled with a massive $23 trillion debt load — that’s Uncle Sam’s problem.

Given Washington’s precarious financial position, I don’t want 100% of my net worth denominated in greenbacks. At some point, quantitative easing and other Fed policies will come home to roost and devalue the dollar — which is precisely why I store some of my assets in Australian dollars and other hard currencies.

2.) Swifter economic growth overseas.
Stock prices are inextricably linked to corporate cash flows, which in turn are driven by underlying economic vitality and growth. As the world’s largest economy with a gross domestic product (GDP) over $20 trillion, it’s virtually impossible for the U.S. to deliver the robust growth rates that it once did.

Back in 2000, the U.S. represented one-third of the world’s total economic output. But that percentage has been shrinking and now stands at just 22% today. That’s still a lot of economic muscle for one country. But four-fifths of all goods and services are being produced overseas. Consumer spending, in particular, is heating up as middle-class workers from Beijing to Mumbai can now afford big-ticket goods that were once considered luxuries.

It’s not uncommon for emerging markets to deliver two to three times faster GDP growth than the U.S. The International Monetary Fund (IMF) is forecasting U.S. GDP growth of 6.4% in 2021. Nothing wrong with that (although year-over-year comparisons are aided by last year’s lockdowns). Still, thanks in part to aggressive stimulus measures, many countries across Europe and Asia are expanding even faster. Forecasters are projecting red-hot economic expansion of 8.1% in China and 12.5% in India.

That humming activity will flow through to corporate earnings in these countries.

3.) More Attractive Valuations Abroad
No need to over-complicate things here. In a nutshell, foreign stocks are cheaper than their U.S. counterparts, both in relative and historical terms.

The S&P 500 is currently trading at about 23 times forward earnings. By contrast, Europe and Japan are both sitting at 18 times earnings, while emerging markets carry a multiple below 15. Compared to the overall MSCI World Index, U.S. stocks are trading at a 10% premium, while Europe and Asia can be bought at discounts of 14% and 24%, respectively.

But let’s circle back to the main reason you’re reading this in the first place: income. As you know, dividend yields in the United States have been on a slow decline for many years for several reasons. But generous dividends remain a priority in many foreign markets.

While the average yield on an S&P 500 stock has sagged to less than 2%, payouts tend to be far more generous in many foreign markets. The average yield in Australia is close to 3%, while the benchmark FTSE 100 in the U.K. is paying nearly 4%. Put it all together, and you understand why headlines like these have begun popping up in recent weeks…

Why it’s time for U.S. investors to consider overseas stocks — iShares
Why it Might be Time to Invest in Non-US Stocks — Wall Street Journal
Is it time to Increase your International Exposure — Schwab
Why it is a great time for International Stocks — Nasdaq

If you haven’t already added some international flavor to our portfolio, now’s a good time to start. I found just the right fund for the job over at High-Yield Investing — so if you’re curious to know more, simply click on this link…