Chinese Billionaire Missing Since October… What You Need To Know

Where in the world is Jack Ma?

That’s the question many are asking right now.

If you missed this piece of news, I don’t blame you. There’s been a lot going on. But the implications of the story are quite serious — and every investor who’s even thought about owning China-based stocks should take note.

Allow me to explain…

Back in late October, Jack Ma gave a controversial speech at a Chinese economic forum.

The speech was controversial because Ma criticized Chinese regulators. He said they cripple innovation in the financial sector within China. A day after the speech, Chinese regulators called Ma in for questioning. Then, the IPO for Ant’s — which is Alibaba’s financial arm — was nixed. (That IPO, by the way, was expected to be the largest in history.)

Now, I should note that BABA is a long-time Top Stock Advisor holding. (Or at least it was – but more on that in a second.) So naturally, I took note of this. It’s a strong reminder about the type of government we’re dealing with in China. While there are certainly many great companies and opportunities in the country, they all face the risk of China’s overbearing government.

More recent reports on Jack Ma’s whereabouts suggest he’s simply “laying low,” but he has yet to be seen.

But Ma’s whereabouts aren’t the only concerns…

Following an executive order made by President Donald Trump in November, which barred Americans from investing in companies that have affiliations with the Chinese military, the New York Stock Exchange announced on New Year’s Eve that it would de-list the ADRs of three large Chinese telecom services companies: China Telecom (CHA), China Mobile (CHL), and China Unicom (CHU). The delistings were set to take effect sometime between January 7 and January 11. On Monday, all three companies’ stocks fell in reaction to the news.

There was also concern about who could be next. Many Chinese companies, such as e-commerce firms JD.com (JD) and NetEase (NTES), have U.S. listings and were left to wonder if they would also be kicked off an exchange.

But late Monday, the NYSE reversed course… and said that after meeting with regulators, it determined it didn’t need to delist the three telecom firms.

Then late in the day Wednesday, January 6, news leaked out that U.S. officials are now considering banning U.S. investors from buying shares in Alibaba and Tencent (TCEHY) – another Top Stock Advisor holding. 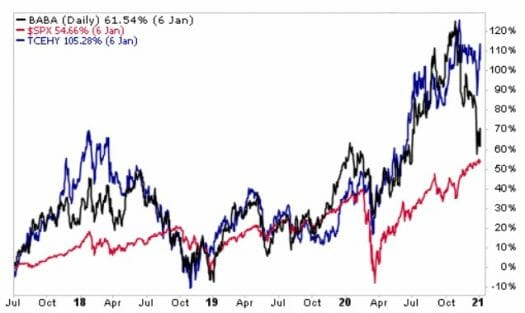 Even after all this happened, we were still sitting on a 61% return in Alibaba and a 105% gain in Tencent. For comparison, the S&P 500 has returned 54% over the same time period.

That’s why I decided to book those gains and step aside. It’s hard to say for certain what will happen. But I’d feel better if we went ahead and booked our gains in our two Chinese holdings now before anything worse happens.

If you own any of the Chinese firms I’ve mentioned above – or were thinking about buying — I’d advise letting the dust settle and seeing how this all shakes out.

If things begin to look better, we can always hop back into these investments.

P.S. Want to reap outsized gains in the New Year? Then you need to find a powerful trend with long-term momentum — like this one…

This coming year will mark the global implementation of 5G (“fifth generation”) wireless technology. 5G provides faster and higher capacity transmissions to carry the massive amounts of data generated by the Internet of Things. The companies involved in 5G include telecoms, chipmakers, modem/IP suppliers, and systems integrators, among others.

We’ve pinpointed a company that’s a crucial player in 5G. In fact, without this company’s proprietary technology, 5G would grind to a halt. This pick is flying under the radar, making the time to buy shares now. For details click here.