They’re responsible for making possible much of modern life as we know it. But I doubt you’ve ever heard their story…

You know about Bill Gates, Steve Jobs, and others. But these little-known geniuses came well before them. They started a technology revolution, formed Silicon Valley, and founded some of the most prominent names in the tech world.

And if that weren’t enough, all of this led to one of the largest eras of wealth creation in human history — one that’s still happening today.

They’re known as the Traitorous Eight…

How It All Started…

This group of eight men all trace their stories back to the “Godfather of the Transistor,” William Shockley. In 1956, Shockley formed the first semiconductor conductor company in Mountain View, California, called Shockley Semiconductor.

Shockley was a brilliant physicist — a Nobel Prize recipient. Earlier in his career, he helped invent the transistor at Bell Labs, a research division of AT&T at the time.

Transistors are what switch and amplify the flow of electronic signals to create the digital ones-and-zeros that instruct electronic applications. As you probably know, they’ve shrunk in size considerably over the years, and they remain an important part of every electronic device. The iPhone X, for example, contains 4.3 billion transistors.

Shockley cobbled together an all-star team of talent — folks who would go on and stamp their own names into the tech history books. But as brilliant as Shockley was, he was a terrible manager. He was paranoid and didn’t trust his employees, often putting them through a battery of exams including intelligence tests, psychological tests, and even lie detector tests. He would even record phone calls to make sure his workers weren’t stealing trade secrets.

His paranoid management style wore on his workers. And only a year after he founded Shockley Semiconductor, eight employees had had enough, and they up and left.

Shockley dubbed them the “Traitorous Eight.” And his company never recovered from this exodus. 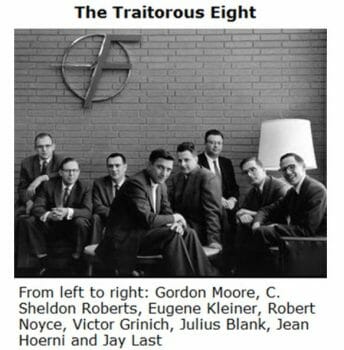 The Traitorous Eight moved 12 blocks down the street from their former boss. They set up shop as Fairchild Semiconductor. Within a year, Fairchild was manufacturing and selling transistors, but with a slight twist.

You see, some of the first transistors were made from germanium, an element from the carbon group that is chemically similar to tin. But Gordon Moore — one of the Traitorous Eight — believed that there was a better material. One that was far cheaper and more abundant. It could be found on sandy beaches all over the world: silicon… hence the name “Silicon Valley.”

Fairchild Semiconductor would go on to set the standard of transistor manufacturing. For instance, before Fairchild, transistors were more or less made one at a time, by hand. That is until Traitorous Eight member Jean Hoerni in 1959 developed the “planar” process, a ground-breaking procedure that allowed for mass production of semiconductor devices. This revolutionized semiconductor manufacturing.

And the advancements didn’t stop there…

Shortly thereafter, Robert Noyce, another member of the Traitorous Eight, realized that it was possible to connect many transistors on a single silicon chip. Together, the transistors formed an integrated circuit. This is commonly known today as the “microchip.”

Their Legacy Is Still Growing

It’s hard to overstate the legacy and impact the Traitorous Eight had on the semiconductor industry and the tech world in general. More than 65 technology companies can trace their roots to Fairchild. This includes firms like National Semiconductor, Advanced Micro Devices (Nasdaq: AMD), and Intel (Nasdaq: INTC).

Intel, which would become the world’s largest chipmaker, was founded by Robert Noyce and Gordon Moore, two of the more notable members of the Traitorous Eight. Noyce is hailed as the Thomas Edison, or Mayor, of Silicon Valley. Moore is the namesake of “Moore’s Law,” which generally states that a chip’s computing power will double every 1-2 years.

Each has clearly left his mark on the technology sector.

Since the early days of Fairchild [which was purchased by ON Semiconductor in September 2016], the semiconductor industry has grown considerably. And investors in these companies have been rewarded handsomely as a result.

My Top Stock Advisor readers and I have done well in this sector. Industry-stalwart Intel, for example, is up 134% since it was added to the portfolio.

But the legacy of the Traitorous Eight is far from over.

The thing is, that growth doesn’t seem to be slowing down… Far from it, in fact. With each passing year, we’re seeing a whole host of new devices that will require more and more advanced chip components, from smartphones to automobiles to household appliances and more.

This means there are still plenty of gains to be had.

How You Can Profit From The Next Big Innovation

For the past year, I’ve been carefully researching news surrounding the rollout of new 5G cellular networks across the globe.

If you’re not familiar with 5G, just know that it this is one of the rare instances where the reality may actually live up to the hype. For example, if we really want autonomous vehicles and all things connected, then we need a network that can support it. And 5G can make it happen.

5G is purported to be more than 20 times faster than the previous 4G standard, with less latency. That means you will be able to stream high-resolution videos in real time. But this goes beyond just streaming video on your smartphone. Being able to communicate in real-time (with little to no lag, or latency) opens the door for a plethora of applications.

But I don’t want to get bogged down in the nuances of 5G… The big take away is that all devices, including cell phones, will need to upgrade as well. And that’s huge for certain chip makers.

For now, just know that there is still plenty of growth to be had in the semiconductor space. And investors would be wise to put their money to work accordingly in a select few players who are positioned to come out on top.

P.S. While you’re at it, I strongly encourage you to check out my colleague Dr. Stephen Leeb’s latest report on 5G…

According to Leeb and his team, they’ve found one company that is absolutely critical to the 5G infrastructure. It literally can’t function properly without it.

The implications of this are huge, and the good news is that the word hasn’t leaked out to the public about this… yet.

You can go here now to check out the report for yourself.