The Most Enduring Asset Of All Time

Not too long ago, I was driving to work when I passed along the same major road that took me to elementary school as a child. Back then, it cut through cotton fields that seemed to stretch to the horizon in both directions. But those bucolic fields were paved over years ago, making way for restaurants, grocery stores, movie theatres, and big-box retail stores.

It’s a common tale in cities and towns across America — across the world, really. The same fruitful land that used to provide agricultural products is now occupied by schools, apartment buildings, and hospital parking lots. On a per-capita basis, global arable farmland has decreased by almost 50% over the past fifty years.

Once upon a time, there were six million farms in the United States and one-quarter of the population worked the land. But today, farmers are an endangered species, largely the product of a sustained shift from rural to urban lifestyles. There are only about 30,000 major farms left — and they play an increasingly vital role in supplying the nation’s fruits, grains and vegetables.

This is normally the point where an investment writer like me would start making the argument for crop nutrient manufacturers such as Nutrien (NYSE: NTR). Maybe another time. Like any commodity, fertilizer prices can be volatile whenever anything upsets the delicate balance of supply and demand. Under the right conditions, these stocks can deliver powerful gains. But they can also go through extended slumps.

I think there’s a better (and safer) angle. Why not invest directly in farmland itself?

Farmland: The Most Enduring Asset Of All Time

We lose large tracts of tillable soil every year to commercial development. And every year, growing populations mean there are more mouths to feed. That’s an ironclad argument for rising values. Like any asset, the more productive and profitable a piece of land, the more it’s worth to potential buyers. 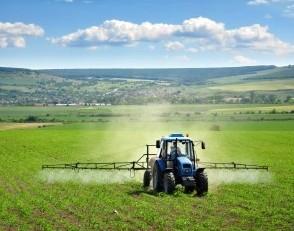 Look no further than Iowa, the heart of the nation’s corn belt. According to a study by Iowa State University, Iowa farmland rose from a value of $1,857 per acre in 2000 to $7,432 last year — with some Grade-A farmland fetching even richer prices of $11,000 per acre. No wonder billion-dollar pension funds and endowments have quietly been piling into this hidden asset class.

Of course, land doesn’t trade on the New York Stock Exchange, so values aren’t easy to track. But the National Council of Real Estate Investment Fiduciaries (NCREIF) has compiled an index comprised of more than 900 U.S. agricultural properties worth $11.7 billion. And the returns of this NCREIF Farmland Index are nothing short of amazing.

In 19 years, farmland had produced positive returns in each of the prior quarters, without suffering a single down year. When stocks tumbled 37% in the 2008 crash, farmland gained 15.8%.

The point is, if you’re looking for downside protection (with some upside to boot), it’s hard to beat farmland.

How The Pros Get In The Farm Business (The Easy Way)

When I first started looking into this stuff, I found an auction underway for 160 acres in Custer County, Nebraska. The property even comes with a pair of 10,000-bushel storage bins. It might be a great investment, but of course, I didn’t pull the trigger.

In fact, I doubt any of us will be making a bid for farmland any time soon. So why do I bring all this up?

Well, fortunately, there’s a way to invest in these kinds of farms without getting your hands dirty…

As my High-Yield Investing readers know, I’m a big fan of real estate. Apartment buildings, office towers, warehouses and other buildings have a low correlation with other asset classes, making them an effective portfolio diversifier. They are also an effective inflation hedge. Most important rental properties generate steady recurring income (like a bond) and tend to appreciate nicely over time (like a stock).

Savvy investors have been taking advantage, acquiring huge swaths of fertile land. Media-mogul-turned-land-baron Ted Turner has been a top bidder at numerous auctions, amassing over 2 million acres of ranch land. When asked about his motivation in land, he stated the obvious, noting, “They aren’t making any more of it.”

He’s not alone. Some of the sharpest minds on Wall Street have seen the potential. A unit of Swiss banking giant UBS bought 9,900 acres of farmland in Wisconsin, followed up by the purchase of 19,200 acres in Texas. Last time I checked, it owns around 50 properties devoted to growing vegetables, rice, apples, and other crops.

The massive Teachers Insurance and Annuity Association (TIAA) has gobbled up more than a million acres of farmland and is now the world’s largest agriculture investor — with a preference for wine-grape acreage.

Now, these guys probably don’t know too much about growing crops. So once they buy the land, it is leased back to experienced operators. This is often done through a sale/lease-back agreement. Here’s a textbook example.

A few years ago, TIAA bought 19,181 acres of sugarcane property from an outfit called Alico for $91 million ($4,700 per acre). Under the terms, former owner Alico will now rent the land back under a 10-year lease for $238 per acre. Multiplying $238 times 19,181 acres means that the new buyer will collect $4.5 million in annual rental income — for a cash yield of 5% on the purchase price.

That’s far more income than you’d get from a bond fund — and bonds generally don’t appreciate each year.

How You Can Invest In Farmland

The point is, there is something reassuring about owning land. It’s enduring. In some ways you could say it’s the “original” asset. And in these uncertain times and choppy market conditions, I can’t think of any better asset to own.

As you can imagine, there just aren’t many publicly-traded companies like this to be found. But allow me to introduce you to one of the biggest buyers of farmland in the United States: Gladstone Land (Nasdaq: LAND). 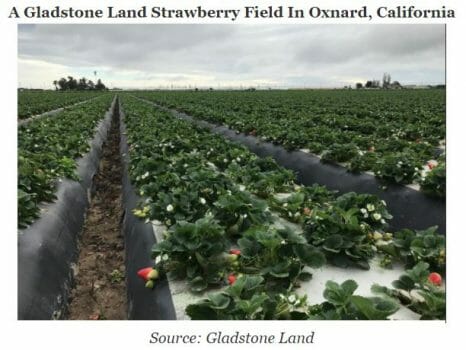 The ticker symbol says it all. Gladstone was created several years ago as a holding vehicle for farmland property. The company has been on a buying spree ever since, focusing on farms in places where climates are temperate and conducive to growing a variety of fruits and vegetables. The portfolio covers approximately 94,000 acres in 13 states.

Since its initial public offering (IPO) in 2013, the company has purchased farms from Oregon to Colorado to Florida. That portfolio now has an appraised value of more than $1 billion. And since properties routinely sell for a healthy premium above the appraised value, I think it’s probably worth much more.

Buying just one share of this stock will give you partial ownership in the deeds to 127 different farms. But remember, growth is a secondary objective. These farms aren’t bought to be flipped for a quick profit. It’s all about the rental income. The more profitable a farm, the more rent the owner can charge. And this company targets farms with higher-priced crops like almonds and blueberries — which earn far more than corn.

As it stands now, LAND pays a little over $0.045 per month in dividends. That puts the yield at about 3.8% based on recent prices.

Now, that’s a bit low for us over at High-Yield Investing. We generally prefer to look for safe, secure yields of about 5% or more. But if you’re even remotely interested in the idea of owning farmland, not having to actually do the hard work, and earning a steady income off of it, then this is one you’ll want to look into further.

One last thing… I normally keep picks like this within the High-Yield Investing family. But since the yield is below our normal threshold, I don’t mind sharing it with you today. But this one is just so interesting that I have to share it with you today. So if you’d like to get access to everything else we cover, then I encourage you to learn more and give High-Yield Investing a try.