In The Face Of Panic… Be BOLD

I don’t know about you, but I had a tough time making a left turn out of my office yesterday — and that’s a good thing.

On a normal day, left turns are next to impossible (we really need a traffic light). But then came the shelter-in-place order, which led to largely abandoned roadways. For the past couple of months, that dreaded left turn has been a breeze, even in rush hour.

Not anymore. My daily commute is once again getting congested, a pretty good sign that we’re finally getting back to normal.

Granted, this isn’t exactly an ironclad economic indicator. We’re talking about one street in one city. But I’m betting you see similar signs of recovery wherever you live… longer lines at the bank, a favorite restaurant re-opening.

I’m not surprised. The American economy has taken its share of hits over the years and is far more resilient than most people give it credit.

All those doomsday projections of a deep recession lasting until 2021 or 2022 seem a bit laughable to me. I’ve been saying (and still believe) that economic activity will bounce back relatively quickly once the pandemic begins to subside. That recovery will be uneven, as some sectors spring back faster than others.

But contrary to popular belief, fear isn’t paralyzing the economy.

After being cooped up at home for weeks on end, consumers are itching to get outside – and spend money. Of course, this assumes they are gainfully employed, which is why the latest jobs report was even more important than usual. 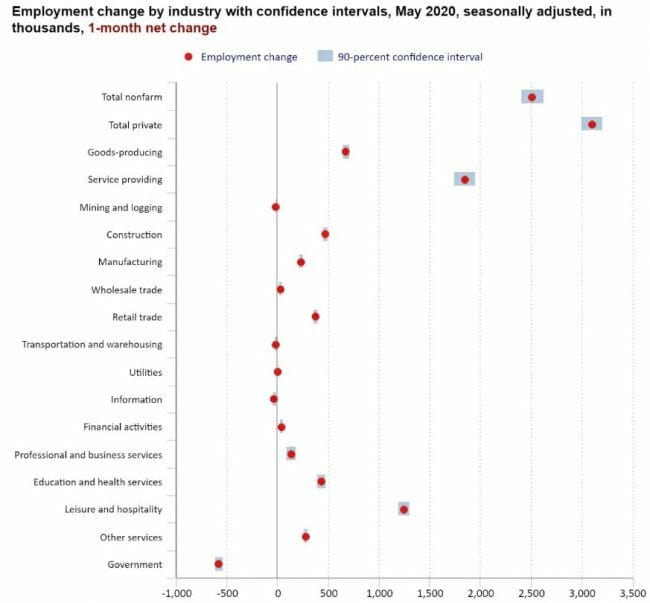 I can’t remember seeing forecasts so wildly off the mark (to be fair, these are unprecedented times). Media outlets referred to the colossal payroll gains as “shocking” and “stunning”.

Is America Really Getting Back To Work (Or Play)?

However you describe them, the upbeat numbers sent the bears into hiding and gave the bulls a reassuring shot of confidence. And there are other positive signs… The day after Nevada’s governor announced plans to re-open casinos, travel search firm Kayak reported a 100% surge in Las Vegas flight searches. And according to a recent poll, three-quarters of cruise line customers said the pandemic would have no impact on their future bookings.

Consumer spending (which accounts for 70% of the nation’s GDP) is already on the mend. Corporate cash flows can only follow.

Sensing an economic recovery sooner rather than later, investors have been driving the major averages back near their former highs. But the gains haven’t been disbursed equally. Spurred in part by robust job creation in the leisure and hospitality fields, money has rotated with some urgency into economically-sensitive consumer discretionary stocks.

This group was among the most punished during the selloff, so bargains abound.

Take Dave & Busters (NYSE: PLAY). I’m a big fan of these restaurant arcades, so it stung a bit to see the stock tumble from $45 per share in February to less than $5 in March. But it soon doubled to $10. And over the past two months, the shares have doubled again to $20. 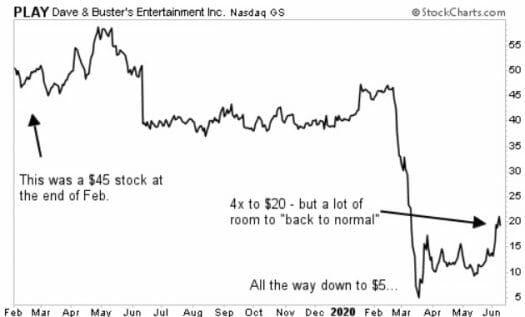 Here’s Where The Boldness Pays Off…

We’ve already got some exposure in leisure and entertainment with a few stocks over at High-Yield Investing. And I’m looking to add a couple more names in the weeks ahead.

This was only possible because we raised our cash levels early in the Covid-19 market crash. And when things looked absolutely bleak, my subscribers and I have been selectively putting those proceeds to work since mid-March.

You can see how that’s paid off in the table below.

This is exactly what I’ve been talking about for weeks.

On March 23, in this article, I said: “There are dislocations all over the market, pricing discrepancies we never see during normal trading. Investors that keep their heads during this panic will be able to exploit them for hefty profits.”

On March 26, as the market began to turn, I told readers: “I watched many frightened investors completely miss out on the last major market recovery because they were paralyzed and waited too long to act. If you’ve got idle cash to invest, at least have a few quality ideas in mind. I’ve done my best to provide with many over the past week and will continue to do so as I see fit. Because as we’re seeing right now, when market sentiment turns, it can turn fast.”

On March 31, I said: “…we’re looking at once-in-a-generation valuations in some corners of the market.”

I don’t bring any of this up to brag. I only mention it because this is what it takes to be a truly successful long-term investor in the market. And yes, that’s true if you’re an income investor as well. Just look at the yields we were able to secure while these excellent companies were sold off during the Covid-19 panic.

Let’s be clear. We aren’t out of the woods yet and there will be more volatility ahead. Still, the early returns on these new additions are encouraging.

Don’t get too accustomed to seeing these kinds of gains on a regular basis. This rally may have gotten ahead of itself. I’d like to see the market hit the pause button and take some time to digest this advance.

Nevertheless, for long-term investors, there are still some attractive discounts in this corner of the market.

If you’d like to learn more about High-Yield Investing and what we’re up to this month, go here now.