Aggressive Trader? Add This One To Your Watchlist

For the past few weeks, I’ve been telling readers that I think we’re about to see a wave of takeover activity.

The conditions are ripe: record-low borrowing costs, record cash piles (for some companies), and depressed prices (for others). It’s just a matter of time.

That’s why I launched my new service, Takeover Trader.

We’ve yet to see any major deals quite yet, but that’s understandable. With the coronavirus fallout still uncertain, along with growing social unrest, it makes sense that companies will wait until things are more certain.

Yet so far, thanks to my PREDATOR system, we’ve identified a number of winning trades from potential takeover candidates. In fact, right now, our first equity position is up more than 20%. And a number of our short-term options trades have paid off big-time (88% and 150%).

Today, I want to tell you about one potential takeover candidate that hasn’t quite made the cut… yet.

But by the time you’re done reading this, you’ll see why I’m watching it closely – and why you may want to put it on your watchlist, too.

Data is everything these days. There’s no secret about that.

That’s why I recently told my readers about a company called Splunk (Nasdaq: SPLK).

Splunk is a powerhouse in the field of machine data, digital information created automatically from computers, phones, and other devices without human intervention. Splunk refers to it as the “digital exhaust” of technology and industrial systems.

There is a mind-boggling amount of data being produced every minute of every day. And it takes powerful software to monitor and analyze in real-time to make critical decisions.

From temperature and pressure sensors to website activity logs, machine data can be scrubbed for valuable insights to improve decision making. The applications are endless. Meteorologists can analyze data to predict hurricanes and tornadoes. Grocery stores can learn household shopping behaviors and extend targeted promotions. Manufacturers can be forewarned of equipment breakdowns before they happen.

Splunk specializes in software tools (on-premise and cloud-based) that aggregate and break down mountains of “big data” to aid in cybersecurity and IT network reliability. Users span the full spectrum of industries… finance, healthcare, media, e-commerce…

The client base has swelled by 2,000 just over the past year and now stands at 19,400 commercial and government customers in 130 countries. Splunk has forged strong relationships with 90% of the Fortune 100, including heavyweights such as Intel, Bank of America, and Coca-Cola. Even the Federal government has trusted Splunk with the integrity of Census Bureau data.

In short, it works with anyone who wants to quickly resolve IT issues, minimize downtime, cut costs, and safeguard against security breaches. That’s a huge audience.

There are other players in this field, but few can match Splunk’s high-performance querying tools and ability to drill down into large volumes of unstructured data. According to Morningstar, its largest customer generates and collects more than 7 petabytes of data per day (one petabyte equals 1,000 terabytes. 1 terabyte equals 1,000 gigabytes).

Could SPLK Be A Takeover Target?

With pricing often tied to the volume of data being indexed, fat (7 and 8-figure) orders are flowing in. Those incoming orders have expanded the unfilled backlog from $380 million to $794 million over the past 12 months. That’s money just waiting to be invoiced.

I should note that GAAP profits are elusive. But that’s largely because of the firm’s practice of rewarding employees with generous stock options. With a median employee salary of $260,000, Splunk attracts top talent. Last year, it dished out $457 million in share-based compensation.

These are shares, not dollars. So on a non-GAAP basis, the bottom line looks much stronger — $335 million last year. I also like the transition to a subscription-based model, which provides a steady, recurring income stream. Management is targeting a powerful 40% growth in annual recurring revenues (ARR) over the next three years.

That forecast came before the Covid-19 outbreak, which is proving to be a positive catalyst in many regards. Data has become increasingly important in this environment, and Splunk’s cloud software bookings surged 80% in the quarter ended April 30 (during the teeth of the economic downturn). 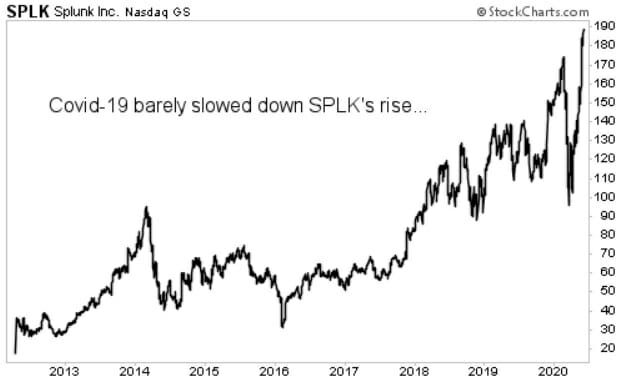 Investors are taking notice. One influential analyst (who has a buy rating) just upped his target from $170 to $195. Potential buyers are undoubtedly weighing these latest results as well. Splunk would make a good fit for several larger competitors looking to bolster their capabilities in this arena. Microsoft, Oracle, and Workday, just to name a few.

SPLK is an aggressive stock. Not because of the business (which is rock-solid), but simply the valuation. The company is trading at 13 times revenue – a multiple that implies extremely optimistic growth assumptions.

I think Splunk can continue to meet or even exceed those assumptions. But any missteps here, and the stock could beat a hasty retreat towards $130.

But for investors willing to take the risk, the potential rewards are great. From kitchen appliances to vehicles, the number of internet-connected devices is expected to exceed 20 billion by next year – or three times the Earth’s population.

Splunk is well-positioned to help customers get the most out of their underutilized data while protecting their networks. It continues to sign new clients, most recently Zoom and TD Ameritrade.

If you’re looking for a growth stock to add to your portfolio, SPLK may be it. But I’d like to get a better price. If shares retreat to, say, $166, then I’d be tempted to scoop them up.

P.S. If you’re looking to generate huge profits with greatly reduced risk, consider the advice of our colleague, Amber Hestla.

Amber is the Chief Investment Strategist of our premium trading service, Profit Amplifier. And she’s devised a highly unusual but powerful tactic that turns tiny price moves into massive gains. And her team is making a bold promise: Over the next 12 months, if the gains from all of Amber’s winning trades don’t add up to at least 1,000%… Just let them know, and they’ll give you a second year of her service absolutely free. Go here to learn all the details.