Today, I’d like to do something a little different and tell you about one of my colleagues. She’s easily one of the most impressive people I know. And it’s not just because she consistently makes money for her readers… It’s also because she has one of the most unique backgrounds you’ll ever find.

I’d like to give you a little background on Amber first. And in just a moment, you’ll have a chance to hear from Amber directly – and how her latest project could be a game-changer for your portfolio.

For those who aren’t familiar, Amber is one of the most well-respected options experts in the United States. But in her former life, she was a military intelligence operative. I’m not kidding. The transition from that to a career as one of the most respected independent trading analysts in the country may seem odd, but once you understand the parallels between the two disciplines, it makes perfect sense.

In the military, Amber was trained to use her analytical skills to assess threats and mitigate danger on the battlefield. By making calculated moves, she and her team were able to meet their objectives without taking on an excessive amount of risk.

That lesson proved important — after all, lives were at stake. But as fate would have it, Amber began taking an interest in finance during her service in the military, primarily because she wanted to take control of her financial future.

This sort of expertise is rare. It’s not every day you come across someone in their field who is highly successful without any sort of formal training. Amber, however, is that rare, special breed that you often find among those who are at the top of their field: self-taught, unconventional background — perfectly conditioned to bring the sort of outside-of-the-box thinking required to stand out from the crowd.

Fast-forward a bit, and Amber began utilizing her training and skills to develop an indicator for her options trades designed to do exactly mimic her goals on the battlefield: maximum success, minimal risk. She called it the ITV indicator.

I won’t give away the details of the ITV indicator just yet. But in 2015, the Market Technicians Association saw fit to award her the prestigious 2015 Charles H. Dow Award, which highlights outstanding research in technical analysis. 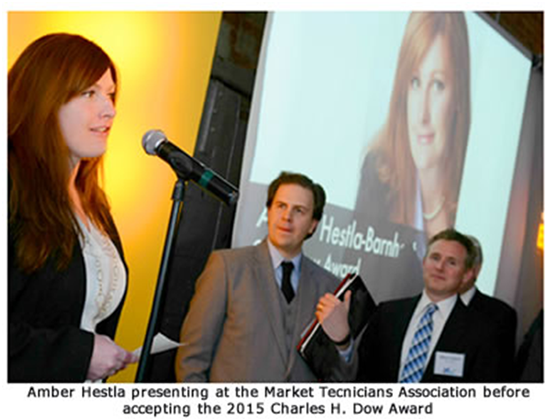 Here’s more from an exchange between myself and Amber…

A lot of our readers are already familiar with your military background. But I just learned something about you recently after all these years… Is it true that you were a preacher’s kid – and you even played music on Sundays?

Amber: Yeah, I grew up in Alabama… in a small town about half-way between Birmingham and Huntsville.

My dad was a pastor there. So all of us in the family… a lot of our life revolved around the community, the congregation, and the church. And being the eldest daughter of a pastor… I started taking music lessons when I was around 10 so I could play piano during Sunday service.

You just released a brand-new presentation about how music theory has heavily influenced your trading system. How does it work? 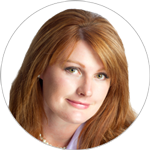 Amber: Well, I’ll save the bulk of the details for the presentation. But let’s just say that by the time I left the military, I was reading everything I could get my hands on about the market. I sought out the industry’s best trading experts for guidance.

After grinding it out at first, I began incorporating ideas I could relate to into my trading indicators. One of the most crucial ideas came from my background with music.

You see, when you’re in a recording studio, sound engineers often use a filtering process to reduce the noise around a particular instrument. It basically helps them focus in on what is important.

So I started to think… What if there was a way to process stock movements the same way sound engineers process music in the studio?

Long story short, I came up with a way to do just that. I started investing small amounts of money using my “noise reduction” filters. Pretty soon, I was making way more than I ever did in the Army.

That’s fascinating. And of course, we just had Memorial Day, so I’d be remiss if I didn’t thank you for your service. I know the military taught you a lot when it comes to your trading career.

Amber: Yeah, thanks. Nine years in the Army will do that. A lot of people know I was a Military Intelligence Analyst during Operation Iraqi Freedom. That basically meant my job was to think about potential threats on the battlefield and work with a team to come up with a plan that put our troops in the best position for success.

The stakes are a lot less when you’re trading, of course. But taking this approach over to my trading career has no doubt helped me and my readers mitigate risk – while still enjoying some pretty big gains.

I want to talk more about that. You’re dealing in a realm of the market that the average investor might think of as “risky.” But thanks to your system, you’ve delivered 49 winning trades over a 12-month period. Some of those were triple-digit winners… and your average holding period was only eight days. How do you do this while playing mitigating risk?

In the Army, we learned to use checklists for just about everything to help ensure the safety of everyone around us. It also helps with managing risk, staying consistent, and keeping focused.

It’s the same with investing. Forming your checklist is a major step in preventing mistakes and overlooking key information when you begin to trade or invest regularly.

In fact, I’ve found that the most effective trading methods contain a detailed checklist or filter that gets the trader or investor to a specific quantitative, objective target on which they can add a subjective twist. Just as a pilot needs a detailed checklist of items before taking off, you need the same to keep your portfolio in check.

Whether you follow my trade recommendations or ultimately decide it’s not for you, it doesn’t matter… If there’s only one thing our readers take away from this, I hope it’s the importance and value of following a checklist.

After many trials and tribulations, I created a five-step system. I use it to find the best trades and ensure consistency. While there are some special techniques that I incorporate into this algorithm, I lay out the bulk of the methods I use in my new presentation. Hopefully, by the time it’s all said and done, they’ll have the same edge as we do over at Profit Amplifier.

I’d like to thank Amber for joining me today. And if you haven’t already, I would highly recommend taking a look at Amber’s free presentation.

In fact, Amber’s going to reveal details of two brand-new trade opportunities she’s releasing within the next couple of days…

One of these trades only happens on rare occasions when three special “indicators” all line up at the same time. And the last time Amber executed this trade, she booked an incredible 90% profit in just 22 days.

Go here now to learn more before it’s too late.