Here’s Some Hope During These Historic Times

We’re witnessing history. But like many historic events, it is one that nobody wants to be a part of.

Schools have been shut down, restaurants closed, sporting and music events canceled, and the stock market has tumbled roughly 30% from record highs in February. The 11-year bull market is officially dead.

There’s an overall sense of fear and panic. It’s understandable. After all, the Centers for Disease Control and Prevention (CDC) has declared the outbreak of the respiratory disease, COVID-19, a pandemic. Not only is COVID-19 spreading rapidly (and some folks dying from it) but we’ve seen our brokerage and retirement accounts rapidly dwindle.

A Market And Economic Reset

I wish I could tell you with confidence that we’re near the bottom and things will turn around and get better quickly. But I can’t. I don’t know when the market will bottom.

It’s my belief that we could see more downside ahead, and that this pandemic (as well as the collapse in oil prices) could put us into a recession. And while that word scares many people, it shouldn’t. 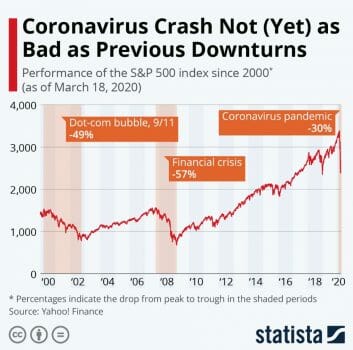 Recessions suck. There’s no questioning that. Folks lose their job, money is lost, retirements are postponed.

But I think — I hope — people are better prepared this time around. The facts suggest that’s the case…

In the March issue of Top Stock Advisor, I told my subscribers about the housing affordability index. This is a simple indicator that gives us a pretty good idea if average people can afford a home or not.

The most recent reading came in at 161.8, which means that the median family can afford 161% of the typical home price. Looking at debt compared to income, we can see that Americans have been much more conservative with their finances.

The chart above shows that we are not only below the historical long-term average, but we are at the lowest levels since the Federal Reserve has been keeping track in 1980. This tells me that on average, folks have plenty of disposable income to cover debt payments.

So, if a recession does hit, know this… I think we should be able to recover quicker than we did during the financial crisis.

Let’s Start Looking At The Upside

Any market gains over the last two and a half years are gone. But as with every major selloff it has also created opportunities that we haven’t seen in nearly a decade. And I’m not talking just about opportunities in the stock market…

The Federal Reserve has slashed interest rates to near zero and launched another round of quantitative easing. While lower interest rates mean we won’t earn much on the money sitting in savings accounts or certificates of deposits (CDs), it does mean we will likely once again see record-low mortgage and auto loan rates.

In fact, General Motors (NYSE: GM) announced March 16 that it is offering 0% financing for seven years, and four months of deferred payments for those with top credit scores. That’s where we’re at.

As we come out of the other side of this (which we will) we will likely see many more of these types of deals as companies kickstart their businesses. Throw in cheap gasoline for an extended time, and I think there’s plenty to be optimistic about.

To say it has been a tough few weeks for our holdings over at Top Stock Advisor is a bit of an understatement. Stocks have fallen so fast that we’ve triggered four protective circuit breakers over the last two weeks to halt trading.

We’ve witnessed historic volatility, with markets collapsing and rising double digits on multiple trading days. Our holdings have not been spared… and some have fallen faster than others. But this is why we stress the importance of owning wonderful companies at reasonable prices, just like Warren Buffett.

Many of our holdings are faring “OK,” but we’ll take it – because a lot of stocks are getting absolutely hammered. And when the dust settles, we’ll have the chance to buy wonderful companies at once-in-a-generation prices.

There will be plenty of time for that later.

I understand that times are scary right now, but we’ll make it through. We can’t let emotions run rampant as that’s when we make irrational decisions. This pandemic hasn’t drastically altered the business of our holdings over the long haul. But in the near term, we will see some headwinds.

But once this pandemic is behind us, folks will go on buying homes, swiping their credit cards, buying insurance, searching Google, watching YouTube, browsing Facebook, and buying lattes at the nearest Starbucks. Invest accordingly.

I’ve been telling my readers about a little-known satellite company that just made a game-changing acquisition. And buried in the details of the deal was a stunning revelation that could be worth billions…

To get a full briefing and learn how you can profit, check out my report.