How To Profit From The Next Phase Of The Cloud Revolution 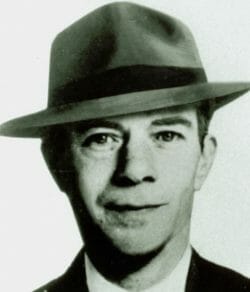 Willie Sutton was a famous American bank robber whose mugshot was featured on the FBI’s Top Ten Most Wanted Fugitives list. During his 40-year career, he stole an estimated $2 million. He also escaped prison three times.

Despite his reputation for robbing banks and breaking out of prison, Sutton is perhaps most famously known for “Sutton’s Law.”

This “law” comes from a dubious story that quickly spread into American folklore. When a reporter asked Sutton why he robbed banks, he (supposedly) replied, “That’s where the money is.”

This simple yet obvious statement can be equally beneficial when thinking about businesses to invest in.

Go where the money is…

Of course, I’m not recommending we rob a bank or anything like that. I’m not even recommending a banking stock. But over at Top Stock Advisor, my premium subscribers and I are following the money.

Where The Money Is… Today

Right now — and in the foreseeable future — there’s a tsunami of money flowing into the information technology (IT) services industry.

Worldwide IT spending is projected to total $4.2 trillion in 2021, an increase of 8.6% from 2020, according to the latest forecast by Gartner.

Of course, the IT industry is a larger umbrella that covers a lot of subsectors, including companies that make software, hardware, and semiconductors, for example. Each subsector of the IT industry has their own unique quirks that require some explaining. While it can get a little tedious with all the jargon, I promise, it’ll be worth your while. So stick with me…

Within the IT industry you have a handful of themes that are showing strong growth. One of the most well-known — and fasting growing — is the “cloud” market.

I’ve talked about the cloud market a few times (here, here, and here) — and we already have some exposure in our Top Stock Advisor premium portfolio. But this is a major trend that is sweeping businesses worldwide. Case in point, the global cloud computing market is expected to grow from $371.4 billion in 2020 to $832 billion by 2025, a solid 17.5% compounded annual growth rate (“CAGR”).

So suffice it to say, we want more exposure to this explosive trend.

There are a couple of other themes that are unfolding in the cloud space, and they’re worth diving into — because that will help us determine where the best opportunities are…

First, the cloud can also be broken down into different segments. The biggest and most well-known is what’s referred to as the public cloud. This space is dominated by the likes of Amazon Web Services, (“AWS”), Google Cloud, and Microsoft Azure.

Think of the public cloud as the utilities in your home. If your home is hooked up to city water, you don’t really own the water or have any control over the operations of the water plant. You simply hook up to water, turn your tap on and get water, which is coming from the same place as your neighbor’s water.

Now, let’s say you need or want a little more control over water. So, you drill a well, put in a pump, and you are now responsible for your own water and operations (if the pump dies, you have to pay to replace it). But in exchange, you “own” your water and are the only house using that water.

In the cloud world, companies who want a little more control and security over the operations of their cloud can turn to the private cloud. These are cloud environments solely dedicated to a single end-user or group.

“Hybrid Cloud” — The Best Of Both Worlds

Next, we have a sort of combination of the previous two, aptly called the hybrid cloud. This segment of the cloud is the one I want to explain, since it’s the newest evolution of the cloud, and it’s the driving theme behind a lot of the growth we’re going to see in this space. 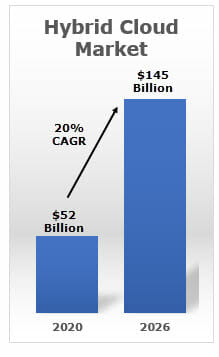 The cloud has undoubtedly changed our world. But like all technology, it’s continuing to evolve.

Out of the gates, the big appeal of the cloud was that companies didn’t have to invest in on-premise servers. It could be outsourced to the “central” cloud, or to a giant commercial building filled with servers that hosted all your website and technology needs. It didn’t matter if you were in Texas and the central cloud was located in Washington.

But as we’ve become more and more connected with multiple computers, smartphones, smartwatches, smart devices, etc. — our consumption of data has skyrocketed. You may have experienced in your own home with your Wi-Fi. You connect more and more devices, which demand more data from the same router in your house, and it bogs your network down.

The same can be said for these central cloud servers… they get bogged down as truckloads of data are being demanded 24/7.

To remedy this, companies are looking at bringing the cloud closer to home — called “edge computing” — and operating on a more private basis so they can have more control, security, and latency (speed) compared with using a central public cloud.

Over at Top Stock Advisor, we’re taking Sutton’s advice and going to where the money is…

This combination of edge computing, true private cloud, and hybrid cloud is exploding in growth. In fact, it’s growing even faster than central cloud growth, and gobs of money are flowing into the future of the cloud infrastructure.

That’s exactly where I want to be.

There’s a lot more to explain with what’s going on in this space, so I encourage you to look into this further on your own. Better yet, you check out Top Stock Advisor, where we dove into this topic in more detail in my latest issue…

In that same issue, I recommended two companies in the hybrid cloud space. The first is a major player with a stable of cash and profits. The other is more of a “swing-for-the-fences” play on the same trend. It hasn’t turned a profit, nor generated any cash flow. So, it’s definitely more of a speculative play, but it’s in the middle of a turnaround, and its future looks bright.

Also, both of these companies sort of stand alone in this space right now. They are the dominant players and should benefit heavily as they take advantage of the evolution of the cloud.

You can go here now to see my latest research report and learn how to gain access to my latest issue.