What Correction? An Update On One Of My Favorite Indicators…

Two weeks ago, I talked about how one of my favorite indicators was showing troubling signs that a market pullback could be on the horizon.

Since then, the markets have shrugged off any suggestion that trouble could be brewing.

The S&P 500 and Nasdaq have both gone on to notch new all-time highs, while the Dow Jones is flirting with its previous high of 35,625 that it set on August 16.

Helping propel markets to new highs was investor optimism after Federal Reserve Chair Jerome Powell’s highly anticipated comments last week. Powell announced that the economy has recovered enough that it could be appropriate to start slowing down some of the Fed’s pandemic-era stimulus measures. First, by reducing its $120 billion worth of Treasuries and mortgage-backed securities that it currently purchases each month.

Meanwhile, he mentioned that increasing interest rates — another monetary tool in the Fed’s arsenal — wasn’t high on his priority list at the moment.

Investors welcomed the news and jumped back into stocks. But the market still hasn’t seen broad participation in the rally, which is still a cause for concern…

This brings us back to the AD Line.

As a reminder, this is what’s known as a breadth indicator. It basically shows us how many stocks are rising compared to falling. As I mentioned in my previous article, I like to think of it as a peek beneath the surface of the market.

In a healthy bull market, we tend to see a lot of stocks participating in the rally. This is a good sign that the rally is being driven by real economic factors and the investor enthusiasm that should accompany it. In short, it confirms the bullish trend. However, if the AD Line fails to keep pace with the underlying index, this is a sign of weakness. From a technical perspective it’s called a bearish divergence. But broadly speaking, it could be a sign that the rally is being driven by enthusiasm (or even speculation) in just a few bigger names.

As you can see in the chart below – the AD Line still hasn’t topped its high from July 2. 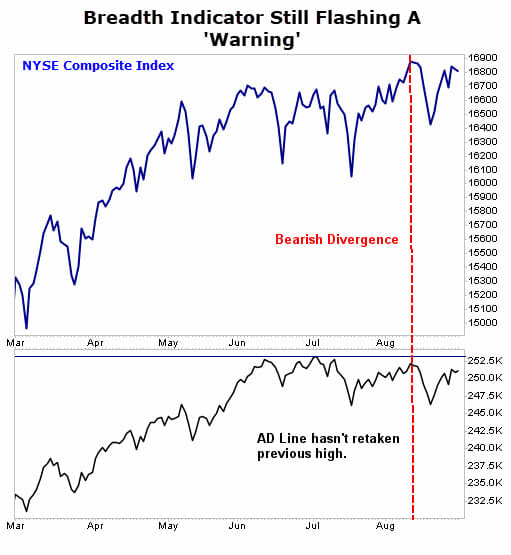 Again, this is what is known as a bearish divergence. And it historically indicates weakness in the bull market. It’s a sign that there could be trouble on the horizon. Remember, I provided a number of examples in my previous article of how this indicator provided early warnings of a market correction.

For example, here’s what it told us in the run-up to the financial crisis… 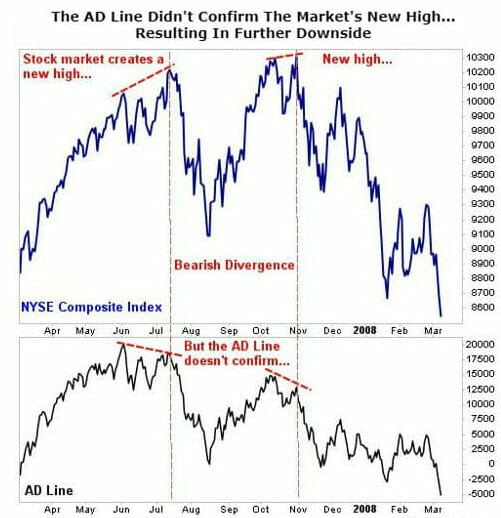 Of course, no single indicator is bulletproof. And it may seem that this could have been a false signal… only time will tell.

I will continue to track this indicator and would like to see the AD Line retake its previous highs as the market marches onward. That’ll tell me the bullish trend is strong and lowers the risk we take on trades.

I’ll keep you updated if we see any major developments. In the meantime, I remain cautiously optimistic about this market — and I’m finding no shortage of opportunities…

For example, did you know that the world’s richest billionaires — Musk, Bezos, and Branson… are in a FIERCE competition, battling it out in what media is calling the “billionaire space race”?

The commercialization of space is one of the biggest investment trends we’re likely to ever see in our lifetime… And each one of these billionaires plan to dominate the $2.5 trillion space industry. But according to our research, ONE may have already won the race, thanks to a new technology that’s hovering above the earth as we speak. And the good news is that you and I can profit from it…

Go here to get the details right now.